Mineral sequestration of carbon dioxide in basalt: a pre-injection overview of the CarbFix project 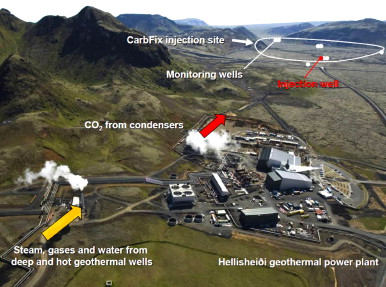 This entry is a cross-post for the Geological Society of Australia.  The talk is likely to be of great interest to hydrogeologists!

The GSA-WA Division is hosting a talk on 7 November 2012 at the Irish Club of WA, 61 Townshend Rd, Subiaco.  The speaker will be Domenik Wolff-Boenisch  from Curtin University, and he will be presenting results from a carbon sequestration trial in Iceland.

Drinks will be available from the bar, and there will be time both before and after the talk to socialise. The meeting will commence at 5.30 pm for a 6.00 pm start for the meeting and talk.

Mineral sequestration of carbon dioxide in basalt: a pre-injection overview of the CarbFix project
Domenik Wolff-Boenisch

The degree to which mineral storage is significant and the rate at which mineralisation occurs depend on the rock type and injection methods. The rates could be enhanced by injecting CO2 fully dissolved in water into silicate rocks rich in divalent metal cations such as basalts and ultra-mafic rocks.

Domenik will talk about the CarbFix group and its major goals and will give an overview of the latest developments with an emphasis on ongoing geochemical research.

Domenik has recently joined Curtin University coming from the University of Iceland where for the last four years he has been the Project Director of the Icelandic partner of the international CarbFix consortium. The CarbFix project is about the capture of CO2 from geothermal activities and its subsequent sequestration into basaltic terrain. Among his responsibilities there, Domenik set-up and directed a high P/T lab for the execution of experiments related to water-rock interactions in the presence of CO2. Prior to that position he was a Research Scientist at UC Riverside and UC Merced in the United States studying the CO2 drawdown capacity of the Higher Himalayas and the biogeochemistry of uranium.

Domenik started his career with a PhD in environmental geochemistry from the Johannes Gutenberg University of Mainz in 1997 and went on to work as environmental consultant in Spain until 2001. Supported by a European Marie Curie postdoc fellowship, he then moved to his first research stint in Iceland dealing with different aspects of the weathering kinetics of volcanic glasses. These studies have already earned him close to 170 citations. At Curtin he will be responsible for experimental research as well as modelling into key geochemical aspects of geothermal heat extraction from the Perth Basin, such as the scaling potential and the effect of non-compressible formation gases on the fluid chemistry during heat production, heat exchange, and subsequent injection.